Regional Electric Usage Patterns and Shopping.  Electricity end uses can vary significantly between homes and businesses across the country. Climate control and water heating, however, are consistently the largest end uses among non-industrial electricity customers. To understand regional variations in electricity consumption, it is important to consider both climate and fuel source. 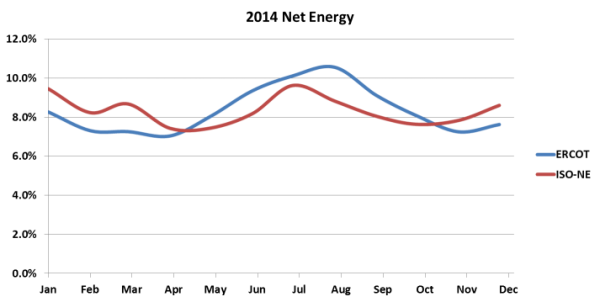 These patterns have implications for electricity consumers in both regions. Variable electricity rates can be riskiest during times of peak consumption. While there are some notable exceptions, Texas electricity customers have historically fared well by avoiding variable rate plans during the peak summer season. New England customers can feel the pain of variable rate electricity plans in both winter and summer.

While odd-term fixed-rate electricity plans are a valid option for many residential and commercial energy customers, it is always good to consider the reasoning behind the offer. If a customer’s contract ends during a peak usage period, the best option may be to select a 12 or 24-month electricity plan to avoid taking a rate hit all at once. The one and two-year electricity offers have a cost-averaging effect and reduce rate shock.

The bottom line is that electricity shoppers should look for savings during peak consumption periods. Short-term rates that apply during months of low energy usage will not be of much help in reducing electricity bills.