Harnessing the power of the wind is not a new concept. Windmills have played a role in improving our lives for the better part of two thousand years.  Windmills enabled our ancestors to mill grain and pump water for their livestock.  While wind energy is still widely used to pump water, it is becoming more commonly used to generate electricity.  Wind-powered turbines allow consumers to choose electricity plans backed by clean wind generation.

The growth of wind generation in the United States over the past 15 years has been amazing. According to the U.S. Energy Information Administration (EIA), wind turbines generated 6,737 GWh of electricity in 2001.  In 2015, this number increased to 190,927 GWh.  That represents more than a 2700% increase in just 15 years.  Wind energy has become a significant part of the generation mix.  It has also reduced the amount of fossil fuel generation needed to meet our electricity needs. 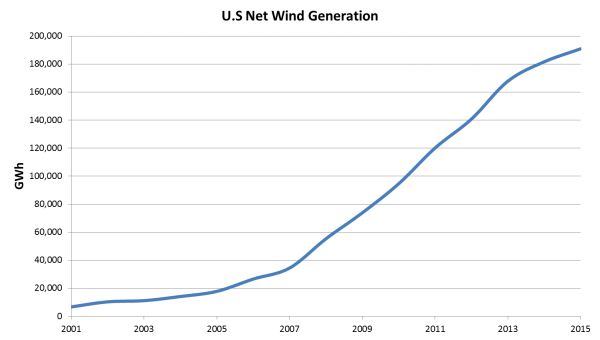 Wind-powered turbines are not evenly distributed across the country. In 2001, California was responsible for 52% of the nation’s wind electricity generation.  Texas, Minnesota, and Iowa combined for another 38% of our national wind power.  This means that 90% of wind generation that year was concentrated in just four states.

Also, it is interesting to note that the state of Washington, lacking any significant wind generation fifteen years ago, produced more electricity from wind in 2015 than the entire nation did in 2001.

Twelve states and the District of Columbia did not report producing any meaningful amount of electricity from wind generation in 2015. The states were:  Alabama, Arkansas, Connecticut, Delaware, Florida, Georgia, Kentucky, Louisiana, Mississippi, North Carolina, South Carolina, and Virginia.

Some of these states have significant hydropower generation. Wind power has not always been able to compete economically with hydropower.  Yet, not every state has favorable conditions for large-scale windfarms.  Each state is unique and it takes a special combination of regulatory, geographic, and power grid factors for wind generation to make sense.