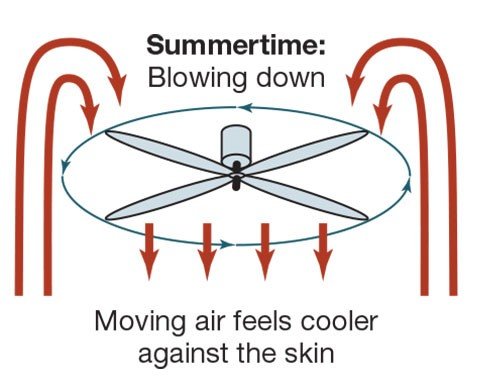 Prior to central air & heat, ceiling fans, window fans & whole house fans were the only means of cooling our homes. Since central HVAC, room fans have decreased in usage but with rising energy costs and increased energy air pollution, we are shifting back to ceiling fans help control electricity costs without sacrificing comfort.

Ceiling fans are a great way to keep air conditioning energy costs down by keeping the feel of the room cooler. In milder climates, ceiling fans keep us cool without running the air conditioner using the wind chill effect. Circulating air feels cooler because it increases the evaporation rate of moisture from the skin, which is the removal heat from our bodies. In summer, the fan should be set to blow down, directly on us.

Since Ceiling fans don’t actually reduce the temperature make sure you turn off your fans when leaving the rooms for an extended period, just like the lights.

Ceiling fans are not just for summer, they benefit us in the wonter too. Just reverse the direction of the fan (reversed seasons, reversed fan direction) so the ceiling fan is blowing up towards the ceiling. Heat rises so a lot of the heat you paid for is sitting up at your ceiling, so your ceiling fan will recirculate that heated air back down without significant drafts so you don’t experience the wind chill effect.

Other Types of Fans

Many types of fans that move air will help keep us cooler in the summer. Window fans are still used in milder climates or weather. Open windows on opposing sides of the home for the breeze to flow all the way across the house. Portable fans can help direct air more precisely, like right in your face or push it a bit further away and get your whole body doused with fresh air.

Older homes came with a whole house fan, mounted in the ceiling cented directly into the attic. They were designed to push the heated air at your ceiling out of the house into the attic to be further vented our the attic vents, while pulling cooler air in through open windows (on the shaded side of the house). If you have one of these old world whole house fans, remember to seal it off during colder months so your precious heat doesn’t escape straight into the attic.