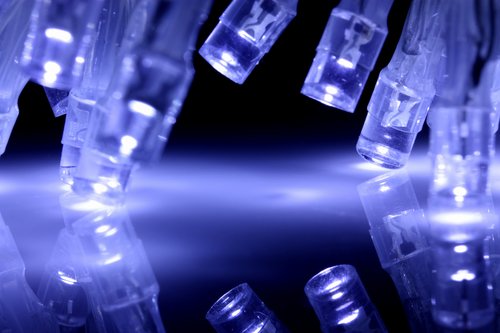 Lighting reigns supreme among the many benefits of electricity. From illuminating our homes to extending our productivity beyond the confines of daylight, lighting is a necessity.  In fact, lighting accounts for 15% of all electricity used in our homes and businesses.  We are all familiar with the changes in home lighting technologies.  A trip to any home improvement store will quickly reveal that our lighting choices are nothing like those of the past.  Even compact fluorescent lights (CFLs), while a relatively recent innovation, are occupying less shelf space.  LED lighting is the new standard and it represents a huge transformation in how we think about lighting and save on electricity costs.

LED lighting is a solid-state technology. Think of it in terms of when televisions changed from vacuum tubes to electronics. LED lighting is electronic while incandescent and fluorescent lighting use filaments and gases inside sealed glass containers.

Red and green LEDs had been around for decades but the technology for creating a blue LED was not discovered until the early 1990s. The blue LED discovery was so monumental that the scientists credited with the research received the 2014 Nobel Prize for physics.

Blue LEDs truly opened the floodgates of innovation. LED screens in smartphones, laptops, tablets, and televisions all owe their existence to the blue LED. Monochrome phone screens, bulky computer monitors, and televisions that could serve as boat anchors are relegated to history.  No less meaningful is the how blue LEDs enabled home and business lighting.

The problem that prevented LEDs from reaching their full potential is that they do not naturally produce white light. Fortunately, there are a couple of ways to create white light from LEDs.  First, you can use blue LEDs to activate phosphors (fluorescent materials).  Second, you can mix light from red, green, and blue LEDs to create white light.  There is also a hybrid approach using both phosphors and LED color mixing.  The key to these approaches is blue LEDs.

The current efficiency of most home LED lights is around 100 to 130 lumens per watt. This is a huge improvement over the 16 lumens per watt achieved by incandescent bulbs. Higher efficiency LED bulbs come with a higher price tag.  Consequently, the U.S. Department of Energy is working with researchers to make 200 lumens per watt the affordable standard for LED lighting by 2030.  This would save the United States 1.2 trillion kilowatt-hours of electricity.  This is more than two times the amount of projected electricity production by wind power or 20 times solar power generation in 2030.

Reducing the demand for electricity is important for our national energy security as well as reducing carbon emissions. As a result of LED technology, it is likely that lighting will only account for 3 or 4% of home energy usage in the near future.